The 2015 Legislative Conference opened Friday evening with dynamic speaker Jennifer Carter Dochler, Missouri Coalition Against Domestic and Sexual Violence. She asks the question, “Are we there yet?”  She spoke about funding for  Family Violence Prevention and Sexual Assault. Jennifer also talked about upcoming bills including SB 130 which allows unpaid leave from work for domestic violence and sexual violence victims. 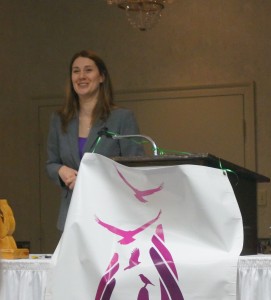 Saturday morning began with Kelly Schulz, Director, State of Missouri Office of Child Advocate. Kelly is an energetic person who has raised 16 children. She spoke about the need for children services and law enforcement to come to an agreement on the definitions of child endangerment and time frames. She was on her way to participate in the Missouri Kids Run after she spoke.

Kathy Licklider, Legislative Assistant, was a delightful speaker. She began with saying she thought the speaker request was for her boss. The legislative chair, Pam Adams, had seen an article in HER Magazine where Kathy had been quoted as saying “Women could do better.” During her presentation, Kathy said women felt like they needed to be asked to run for office. She personally asked everyone in the room to run for office even if it was for a local school board. 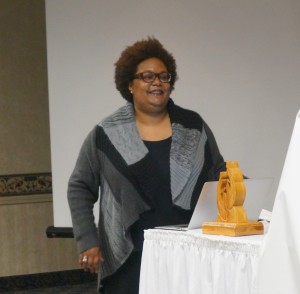 Pamela Merritt, Communication Director, Progress Missouri gave an informative update on current Missouri Legislation. She said a Hearing on HB44, the gender equity pay bill,  would be held Monday March 9 and that it would hopefully be voted out of committee. She asked us to track the bill and to reach out to our representatives. She also spoke of the need to shield the addresses of rape, domestic violence, and human trafficking victims. She said this was the third year to try Medicaid expansion. This expansion would help the working poor and those who are trying to make it on their own instead of remaining in the system. 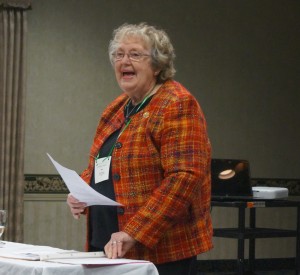 Betty Beason, Harrisonville BWM, spoke on “Helping Military Women.”  Business Women of Missouri believe that we need to be actively involved in connecting with military women while on active duty and during their transition to civilian life. Several clubs adopt a female soldier and send care packages throughout the year. Betty reminded the attendees that we work with BPW Foundation on this important mission to show our appreciation and support of women in the military. 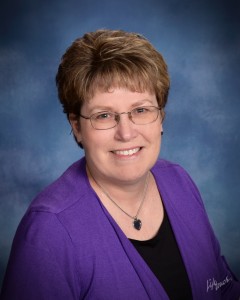 Linda Fisher, Sedalia BWM, was the last speaker of the conference. Her PowerPoint presentation was on Alzheimer’s Legislation: Many Voices, One Message. Her presentation began with how Alzheimer’s disease impacts women. Two-thirds as many women as men have Alzheimer’s and women are 2.5 percent more likely to be caregivers. She spoke on current state legislation, the Senior Savings Protection Act and $450,000 for respite grants. On the Federal level, Linda compared the cost of the disease ($150 billion for Medicare and Medicaid) to the investment in finding a cure ($566 million). She finished with tips on how to be an effective advocate. 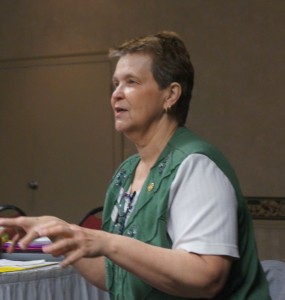 Pam Adams, Legislative Chair, was commended for putting together an interesting and informative conference. Attendees reviewed the Legislative Platform and after discussion, updated the language to move toward taking action on the issues important to BWM. By becoming advocates, using our resources to educate and train, and actively supporting the ERA and other legislation, we can make a difference!